After our previous great dining experience at Whisknladle which you can read about here, I’ve been wanting to go back. We got a chance to recently, doing an early birthday celebration for my friend Steve.

Whisknladle’s menu offers a wide array of dishes that you won’t normally see on restaurant menus. Almost everything is made in house. Rather than separate out appetizers and main entrees, everything is listed together, allowing you the freedom to order a few dishes to split amongst your party. I tried to get a better picture of the menu by holding it up to the light, but I didn’t realize the back of the menu ended up shining through too. 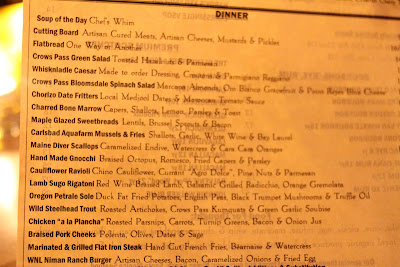 We were given some hot, crusty sour dough bread to start. 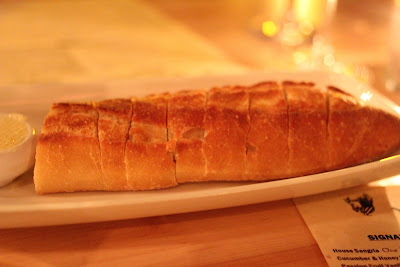 Then we ordered some cocktails. I got a cucumber honey mimosa (not the one pictured). I really enjoyed it. It was sweet and the cucumber and honey combination worked well together. 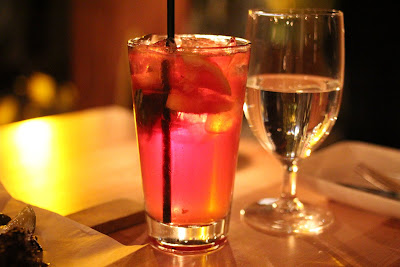 After hearing the descriptions of various dishes from the waitress, there were quite a few we wanted to try.

We got the fried chorizo dates. This had been my favorite dish of the night when we previously ordered it, so we had to have it again. There is such a great play of flavors on this plate. You have the crunchy fried bread crumbs, the savory and spicy chorizo, the sweet date and the acidity from the tomato sauce. 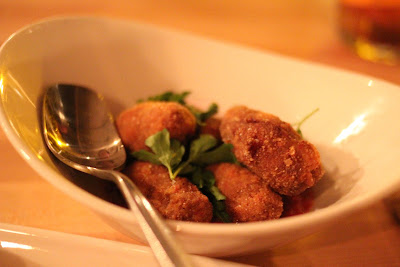 We also ordered the flat bread. I forgot what exactly this was topped with, but it was good. It was my first time having flatbread pizza and I really like it. The runny egg yolk made it even better. 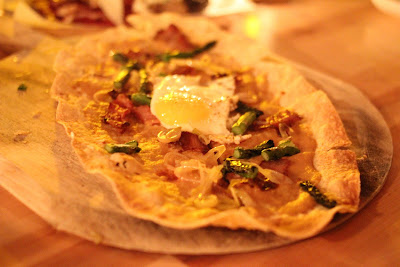 We also got a half order of the cutting board. The cutting board changes from day to day. On this night, there were three different cuts of meat. Again, they told us what they were, but I don’t remember. They all tasted good though. There were also various cheeses, olives, pickles. One of my favorite items on here were raisins that were still attached to the vines. 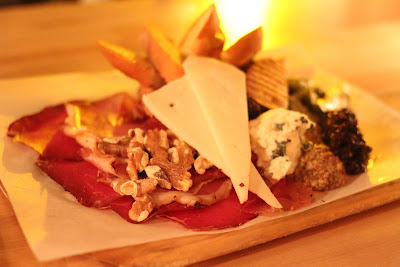 After this, we had a brief pause, where our plates and utensils were changed out so we could began our “entree” portion of the night. The service was really great here. We absolutely loved our server last time and this time we got someone else, but she was just as attentive, nice, and enthusiastic.  I don’t know where Whisknladle is finding these servers, but I wish all my servers were this wonderful.

First up was the house made gnocchi. This dish was just okay for me. Nothing really stood out and it’s not something I’d order again. 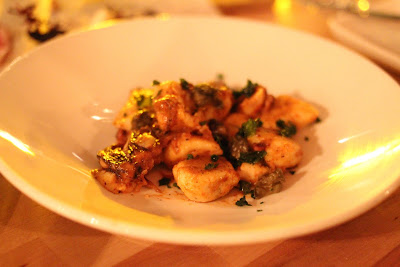 We also ordered the sole fillet with white truffle oil and trumpet mushrooms. This ended up being the biggest disappointment of the night and also in my opinion, way overpriced. The fish filet were clearly frozen pieces of fish, as you could tell by the texture and the taste.  Nothing about this dish was very appetizing other than the aroma of truffle oil. 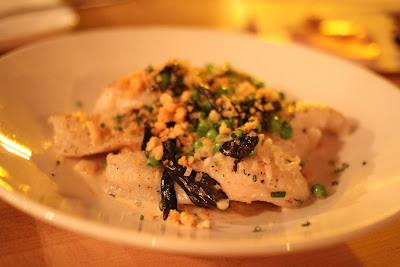 Now that I’ve had two experiences here, I think I’ve begun to see a pattern. The most impressive dishes at Whisknladle seem to be the “appetizer” dishes. The main courses I’ve had so far have been disappointing and a little pricey. I think next time I’ll stick to just ordering a lot of the appetizer dishes.

The dessert descriptions sounded delicious but we were too full. However, our server was then nice enough to give us each a free dessert card on our next visit. Now I’ll definitely have to go back for my free dessert.