Amaya at The Grand Del Mar

San Diego Restaurant Week is almost here! It runs from September 19-24. During this week, many restaurants feature a three course price fixed menu, for either $20,$30, or $40. You can view the website for all participating restaurants and the menus that will be featured. It’s recommended that you make reservations for the restaurants you plan on trying.

Loyal readers of my blog will know that I enjoy participating in Restaurant Week. It allows me to get a good deal at a favorite restaurant or sample a new place I’ve been wanting to try out. Last time restaurant week occurred, I was generously provided with an invitation to preview restaurant week.  I previewed Island Prime.

This time around, I was again invited to preview restaurant week. There were a couple of restaurants to choose from. I reviewed the menus of each of the restaurants and checked out their ratings on yelp. Finally, I decided on Amaya.

Amaya is located in The Grand Del Mar, a luxury resort hotel. I’ve never had a chance to visit it until now. Nestled deep in the Del Mar area south of the 56, the hotel seems to exist in its own world. There is quite a distance between the entrance into The Grand Del Mar and when you actually reach the main hotel. Once you arrive, valet parking is complimentary.

The hotel building boasts many large party rooms, lounge areas, and restaurants. The decor reminded me a lot of the Wynn hotel in Las Vegas. Amaya was opened in 2007 and is considered one of the more “casual” restaurants, though it is far from casual.

After being greeted by the host, we were given our choice of seating: inside/outside, table/booth. While the outside looked beautiful, I chose inside as I didn’t want to be cold. We also chose a booth rather than a table. I was amazed by the size of the booths. Each booth was a large semicircle that could easily fit four. 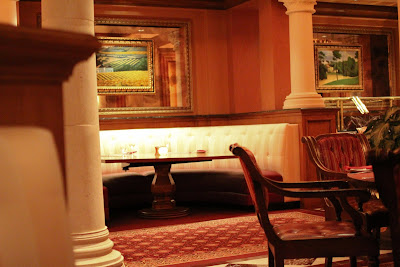 We were initially presented with the regular dinner menu, which left me puzzled. But then the chef came out and explained that he was planning on making us two of the three appetizers that would be offered during Restaurant Week, and then let us choose an entree off of the menu.  I forgot to take a picture of the regular menu, but you can view a sample one here which is similar to the menu I viewed. The one difference I remember was that the$40 3 course tasting menu at the bottom, listed two appetizers, entrees and desserts to choose from. It’s their version of having restaurant week all year long.  The menu they are offering for restaurant week can be found here.

We were first served a Golden Tomato Gazpacho with an avocado parfait. Served chilled, this soup has tomatoes, onions, cilantro and all the spices that usually make up a salsa. In fact it tasted pretty much like a more liquid version of salsa. 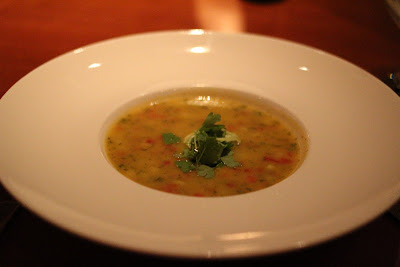 The soup was accompanied by warm pretzel bread rolls.  One look and I could see where the bread got its name. The outside crust is dark and has a texture that is similar to a soft pretzel and is sprinkled with course salt,. The inside is a soft bread. 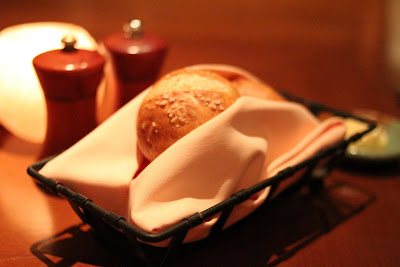 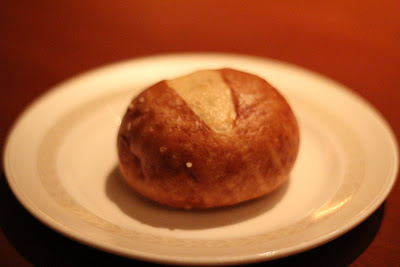 BF enjoyed the soup more than me. He finished his and mine and most of the bread.

Our next course was the Terrine of Smoked Duck and Foie Gras. It was accompanied with grilled sour dough bread and a balsamic strawberry salad. This was my favorite dish of the evening. 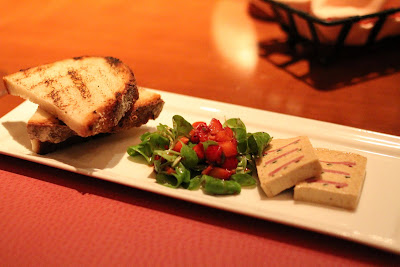 I’ve always thought I liked foie gras but after a few bad experiences, I was beginning to think I was mistaken. This appetizer restored my faith.  The foie gras was wonderfully rich, salty and smoky. Sandwiched in between each slice of foie gras were small pieces of smoked duck. The foie gras tasted great slathered on the crispy grilled bread.  The slightly sweet and tart strawberry salad complimented the foie gras well.

I enjoyed every bite of this dish and would come back here again just for this. It was also quite a big portioned appetizer. If you like foie gras, and you come here to dine for restaurant week, I definitely recommend this appetizer (it’s not on the regular menu).

For our entrees, I chose the Duo of Lamb: Grilled Chops, Shepherd’s Pie, Spring Pea Purée. 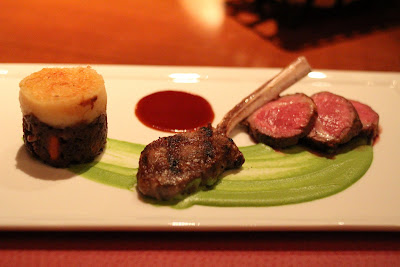 The lamb chops were cooked to a perfect medium, as I requested. I did feel that the portion of this entree was a bit small. And while I know lamb has a lot of fat, I felt that the meat in my plate was particularly fattening. My one chop still with its bone was almost all fat. And there was a large chunk of fat in my Shepherd’s Pie. I did enjoy the lamb medallions though and I like the Spring Pea Puree. 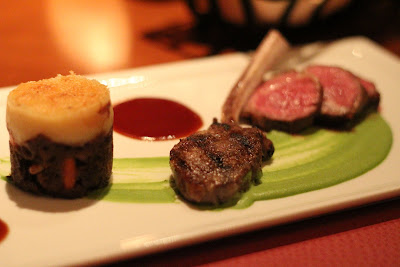 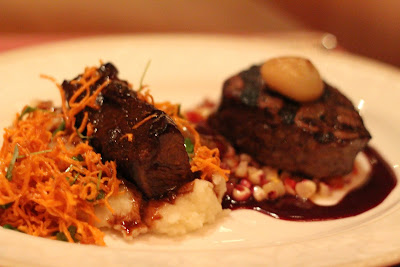 In contrast to my plate, BF’s entree looked huge. He had a generous cut of filet, a big portion of short rib and a bed of mashed potatoes. He asked for his filet to be a medium rare, and it was cooked just right. I enjoyed the fried crispy shredded vegetables (I think they were carrots) that topped the mashed potatoes. The short rib was very tender. 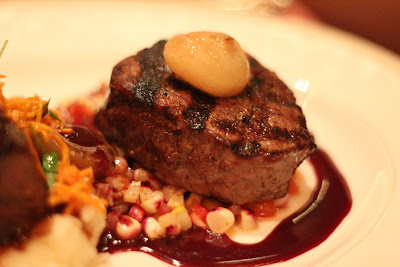 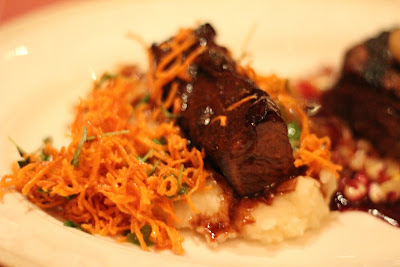 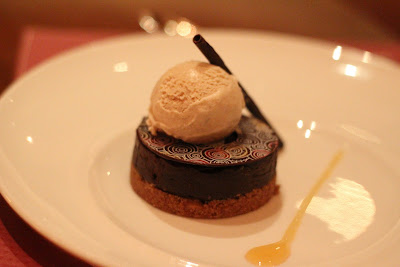 The other dessert was a cheesecake studded with layers of pistachio nuts. 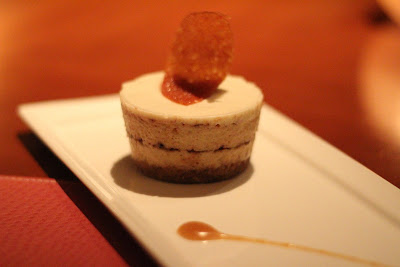 Both desserts were quite rich and we ended up not being able to finish them.

Overall, it was an enjoyable meal. I had my anxieties when I chose Amaya because of subpar dining experiences at other nice hotel restaurants. But Amaya delivered. The service was attentive, without being intrusive. The dishes were well prepared and I loved that the chef came out to talk to us in the beginning and prepared us this special meal, which allowed us to sample so much of the menu. We also spoke to the Director of Food and Beverages at some point during the night.

22 comments on “Amaya at The Grand Del Mar”