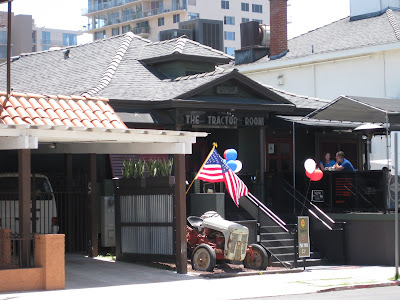 After some great experiences at Hash House for brunch, found here and here, I’ve been wanting to visit their sister restaurant Tractor Room.  This place is supposed to be similar, but specializes in gamey meats, which I love!  I decided to try them out for brunch this past July 4.

I was amazed about how close Tractor Room is to Hash House.  It’s basically across the street and a few steps away.  I also noticed that while there was a line and wait of people outside of Hash House, The Tractor Room was much quieter.

Inside, The Tractor Room is quite dark.  If we hadn’t just come from outside, I would have thought it was night.  There is a large bar that takes up most of the restaurant.  The bar has bar chairs that have cow prints on it.  The decor is similar to that of Hash House, with pictures of tractors and farms on the wall. 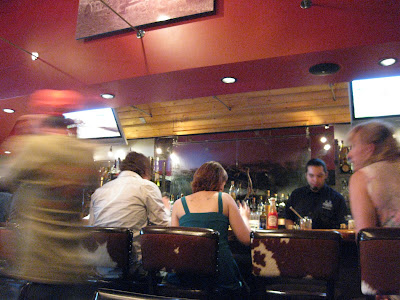 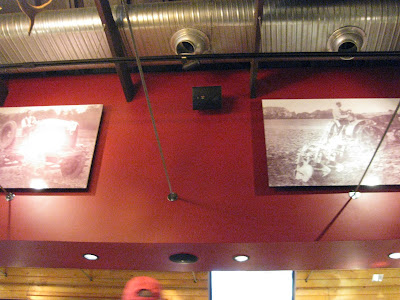 There are only a few tables inside.  A few giant tables and a few small ones.  When we were seated, we were seated at an eight person table, despite their only being three of us!

The drink list is extensive.  I didn’t even know there were so many alcoholic breakfast drinks.

The actual brunch menu is a bit more limited compared to the Hash House. After the yummy flapjack at Hash House, I had to have the tractor combo which comes with a flapjack of your choice, 2 eggs and sausage.  I got the macadamia raspberry pancake as I love macadamia nuts. 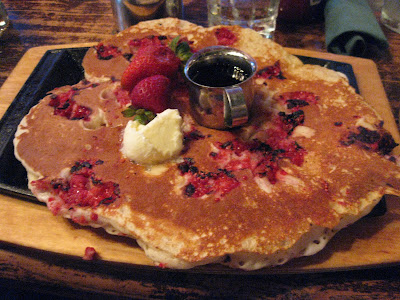 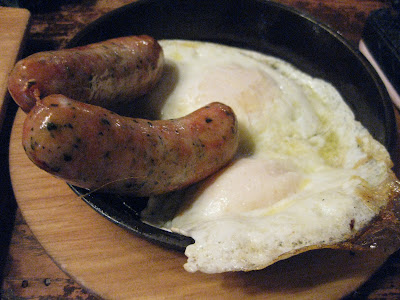 The flapjack was not nearly as big as the one at Hash House.  It was about 1/3 smaller.  It also wasn’t nearly as fluffy.  I was pretty disappointed.  This pancake wasn’t crispy on the outside.  It was soft pretty much all around and a bit soggy at the bottom.  Also, the raspberries just don’t work well with the flapjack.. They basically got completely mushed and were just raspberry seeds everywhere inside the pancake.  Plus they were very sour! I only like the macadamia nuts inside the pancake.  But overall, disappointing.

Boyfriend ordered the Wild Boar Hash. He got it with the corn bread skillet, something I’d been wanting to try.  The idea of corn bread served hot in a skillet sounded so yummy.  Plus, we have not really enjoyed the brunch biscuits of Hash House. 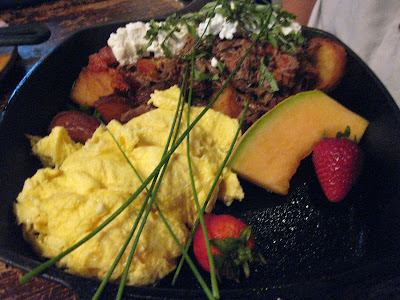 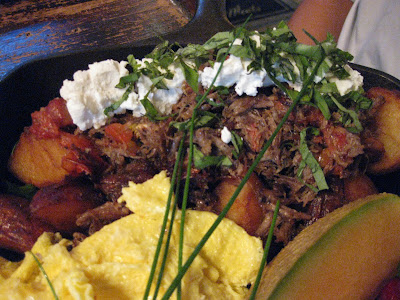 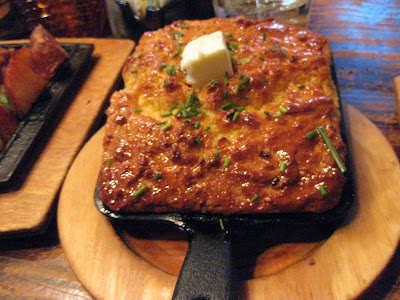 The shredded boar had a nice flavor.  The potatoes could have been a bit more crispy. The eggs were nice and fluffy.  The corn bread came out piping hot and had a yummy sweet glaze on the outside, much like the yummy dinner biscuits served at Hash House. The corn bread at Tractor Room was pretty good, but mainly because of the sweet glaze.  The inside is a bit too dry for me.  The corn bread is pretty big and makes you full after just a few bites. 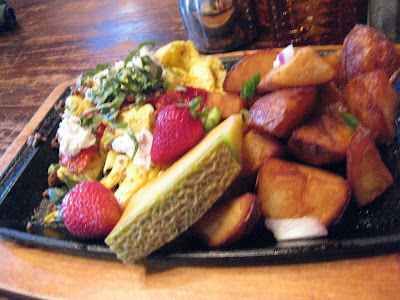 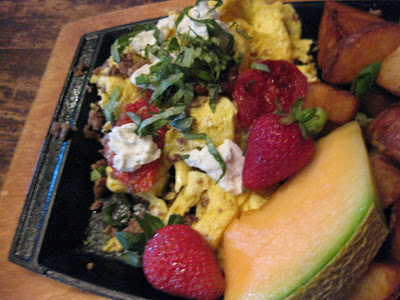 He said it tasted pretty good.

The service here was very attentive, just like Hash House.  Overall, we agreed that we prefer Hash House for brunch.  But I might come back here to try the dinner.