In this post you’ll find all the brownie recipes you’ll ever need! I’ve gathered up all of my favorite recipes for you to browse including classic brownie recipes, keto, low-carb and gluten-free brownies. Don’t want to make a whole batch? Then you’ll love the brownie mug cakes I’ve included, too! If you need a chocolate fix you will love this post and if you want even more ideas be sure to check out my entire brownie recipes collection. 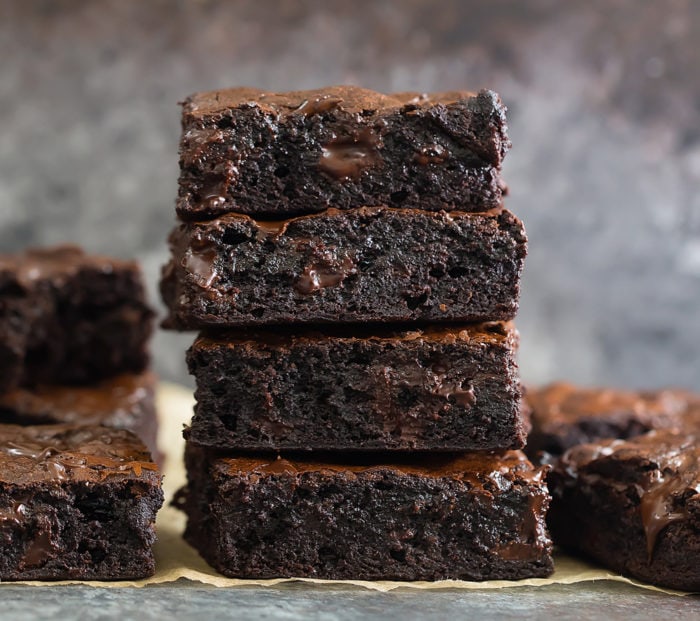 Best Fudgy Brownies | If you want a classic brownie recipe that’s all about the chocolate, this is the recipe to try. They are fudgy and chewy with a shiny, crackled surface.

Bacon Caramel Brownies | After making these brownies I’m convinced there’s nothing that can’t be made better with some bacon. The bacon is added to the caramel sauce giving these treats a delicious salty-sweet flavor.

Ultimate Brownies | For a serious craving you have to give these a try! They have a layer of Oreo cookie crust, followed by a layer of Biscoff spread, and a thick layer of fudgy dark chocolate chewy brownies with mini Reese’s peanut butter cups. Plus, they are finished off with a drizzle of Nutella.

Tiramisu Brownies | A classic Italian dessert combined with brownies makes a decadent treat. This easy recipe starts with a boxed brownie mix that is doctored up so they taste homemade. 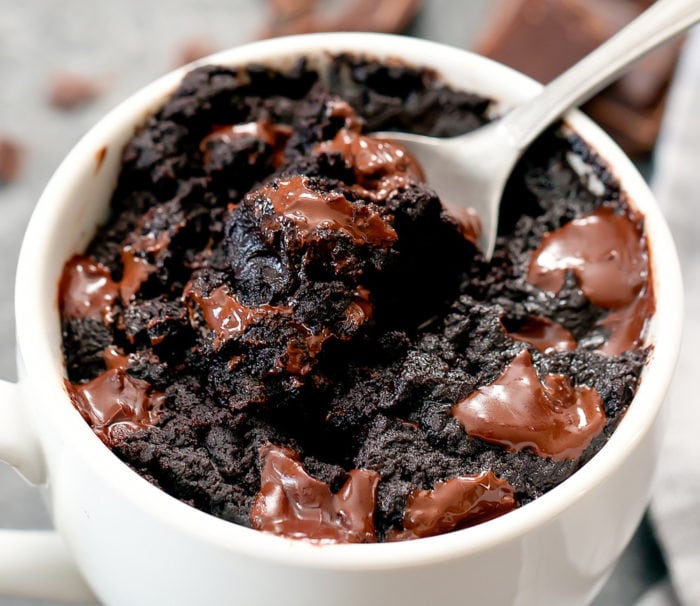 Brownie Mug Cake | Super fudgy cocoa brownie in a mug! This single-serving dessert cooks in the microwave and is ready in less than 5 minutes to satisfy your chocolate cravings when you don’t want to make a whole batch.

Keto Brownie Mug Cake | This single-serving brownie is super fudgy and cooks in the microwave. It is also low carb, gluten-free, and keto-friendly and is so delicious and easy. If you love Nutella you should try my keto Nutella brownie in a mug, too.

Peanut Butter Nutella Brownie Mug Cake | This four-ingredient mug cake will satisfy your sweet tooth. Serve it as is or add the optional chocolate ganache frosting for an extra treat.

Flourless Nutella Brownie Mug Cake | This fudgy Nutella brownie is just 3 ingredients and cooks in the microwave. It’s also flourless, eggless, and one of my favorite mug cake recipes. I also have a regular one with flour you might like, too. 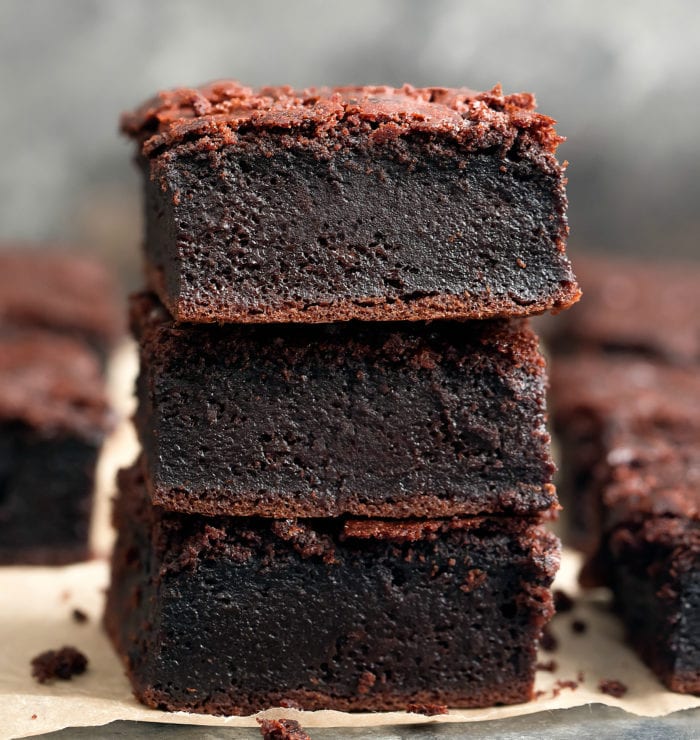 Mochi Brownies | These are a perfect blend of chocolate brownies and butter mochi cake. They look just like traditional brownies, but they have a chewy texture when you bite in. They are also gluten-free.

Dulce de Leche Brownies | These easy brownies are made with dulce de leche, which is like caramel sauce, and it gives them a rich and fudgy texture. They’re chocolatey, chewy and so easy to make.

Peanut Butter Brownies | These are made with natural peanut butter which is perfect with chocolate. They have a chewy and fudgy texture and are flecked with bits of peanuts. 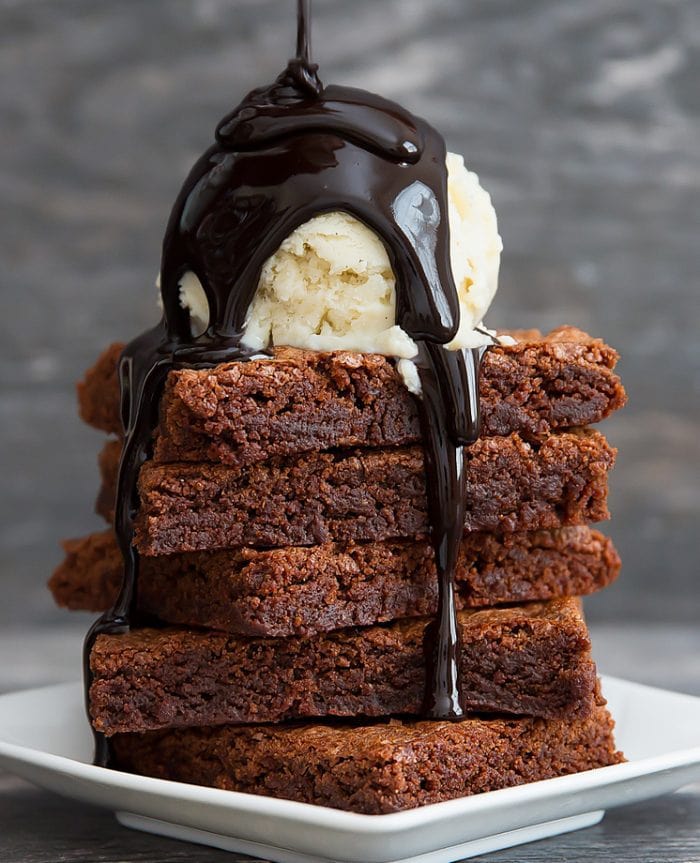 Easiest 3 Ingredient Nutella Brownies | When you need a batch fast, this is the recipe to make! These Nutella brownies only have three ingredients and take 30 minutes from start to finish. You might like my Nutella brownie for one if you don’t want a whole batch.

Flourless Nutella Brownies | I also have this flourless version that’s just as easy to make!

Flourless Pumpkin Brownies | These flourless pumpkin brownies are an easy one-bowl recipe. They come out chocolatey, moist, and chewy and can also be made low carb. I also have a regular pumpkin brownie recipe and a pumpkin brownie mug cake, too!

Zucchini Brownies | This is another easy one-bowl recipe. The brownies come out so moist and fudgy. You won’t taste the zucchini at all plus they are eggless! You might like my flourless version, too. 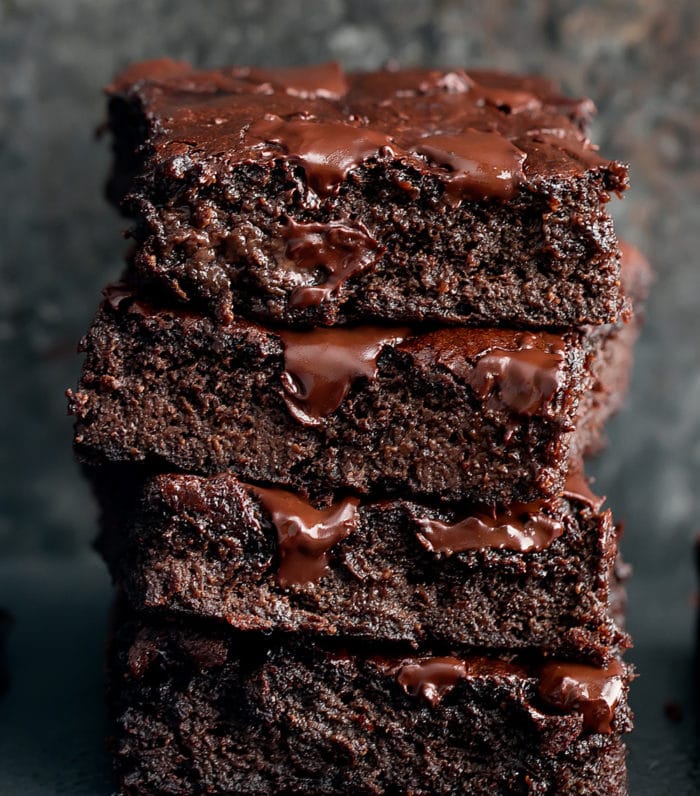 Flourless Banana Brownies | These are rich, fudgy, and full of banana flavor. They taste like a cross between banana bread and brownies. As an added bonus, the batter can be easily prepared in the blender.

Keto Avocado Brownies | Avocado is a really easy way to give brownies a fudgy texture and you can’t taste it! You would never guess these are keto-friendly.

One-Bowl Fudgy Paleo Brownies | These fudgy paleo flourless brownies are easy to make and require just one bowl and no mixer. The batter is ready in minutes and you can have fudgy chewy brownies ready in less than 30 minutes.

Gluten-Free Avocado Brownies | These gluten-free ones are super chocolatey and easy to make. The batter is prepared in the food processor and ready in minutes.